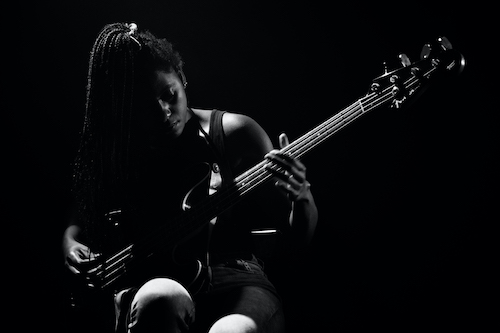 FARIDA AMADOU Belgium
Farida Amadou (b.1989) is a self taught bass player based in Liege, Belgium. The electric bass is her main instrument since 2011.

In 2013, she has started to play a lot of different musical genres, including blues, jazz and hip-hop. The same year, she had a big interest on improvised music when she met L’Oeil Kollectif members and started to play with percusionnist/drummer Tom Malmendier. Nystagmus duo was born in late 2014.

In May 2018, she started a new duo project with the drummer based in London, Steve Noble, including trio collaborations with Alex Ward on clarinet, Chris Pitsiokos on saxophone, ex- Sonic Youth’s guitarist Thurston Moore on guitar and recently with the free jazz pioneer Peter BroÌtzmann.

Farida Amadou was also part of the OORSTOF series (curated by SoundInMotion – Antwerp) project with Ken Vandermark and his band MARKER. For the second part on the year 2019, Farida Amadou is focusing her work on solo performances. A solo album was released in 2020.