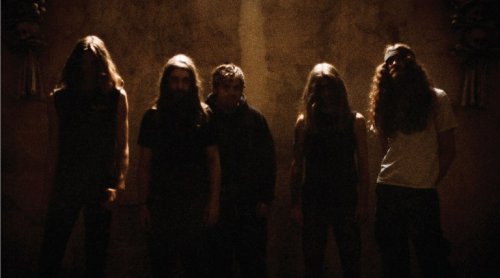 Although Seattle’s Black Breath is a fairly young band they are quickly becoming everyones new favorite band. They have absolutely stormed onto the hardcore and metal scene with their unique and uncompromising sound. After gathering a loyal cult following the band took their assault around the USA supporting Trap Them and Victims. Late last year Southern Lord released the very first recordings from Black Breath in the form of the Razor to Oblivion EP. Raw, intense and in your face this EP has created a immense buzz and effectively set up the highly anticipated next move!


For this, their debut full-length the band went into Kurt Ballous' (Converge, Trap Them, Disfear) God City studios in Salem, Massachussets. The end result of those monumental sessions is a recording much darker, heavier and more brutal than anything they have done before. The direction of the album contains many of the punk and hardcore influences that were exhibited on the Razor To Oblivion EP. However, after listening to just five seconds of the albums opening track, "Black Sin (Spit On The Cross)" it's painfully obvious the band has let their Swedish death metal obsession take control! One of the bands strengths is its ability to truly craft a memorable song with hooks that dig into your skull and never let up. This is heavily apparent on the thrashing burner "Children of The Horn".


Not since the mid-eighties when bands like Motorhead, Metallica and Discharge were giving metal heads bangovers has brutality been so infectious. The decidedly more Death Metal direction of Heavy Breathing is a extremely bold move that will definitely set them apart from the rest.

Sentenced to Life is the highly-anticipated follow-up to the band's raging 2010 debut album, Heavy Breathing. The new album projects an even more vile, metallic sonic attack than it's predecessor... with a bit less rock and roll swagger and more full-on crushing death metal rage.

This is a product of furious creativity jammed into a short span of time, written in the seemingly endless Winter after returning from their November 2010 European tour. Bearing 10 thunderous tracks in just under 33 minutes, Sentenced to Life features such smashing BLACK BREATH hits as Feast of the Damned, Doomed, Forced Into Possession, Home of the Grave and of course the title anthem, Sentenced to Life.

The band once again recorded at God City Studios with Kurt Ballou (Converge, Nails, High on Fire), and had the finished product mastered by Alan Douches at West West Side. Easily the band's most thunderous recording to date, BLACK BREATH sentence every listener to a life of head banging after spinning this motherfucker!