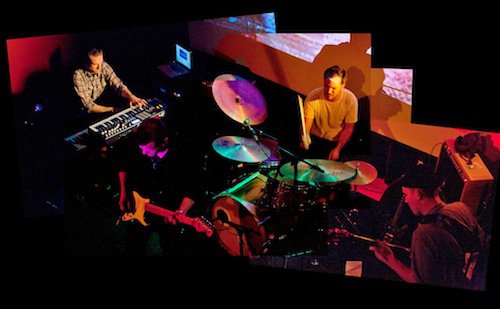 Instrumental psychedelic hip-hop hybrid Lilacs & Champagne spent their first two albums shining a light on the darkest corners of vintage European cinematic oddities. Their eponymous debut album and the follow-up, Danish & Blue, were warped, psychedelic takes on damaged funk and b-movie film scores. With their palette now thoroughly smeared, co-conspirators Emil Amos and Alex Hall are flirting with the makings of a masterpiece in Midnight Features Vol. 2: Made Flesh.

From the mournful opening breaths of “Roses & Kisses” – a new career high point for the band – it’s obvious they are charting a dynamic new course that simultaneously pays tribute to and explodes the legendary beatmakers that came before. Midnight Features Vol. 2 skins traditional hip-hop to its bones, then builds it back up with the flesh of Eastern European private press psych records, obscure film soundtracks, indistinguishable radio broadcasts, library tapes, and who knows what else from who knows where else.

The most remarkable feat of Midnight Features Vol. 2 is not the impressive array of sound sources, but how Lilacs have managed to orchestrate so many seemingly disparate genres into one cohesive future music. They execute sudden changes in mood and tone with uncanny dexterity and grace – a feat made more impressive by their newly expanded line-up that includes Jay Clarke (Ash Black Bufflo) and Zac Reno. They’ve clearly found their groove, and they’re just starting to dig in.