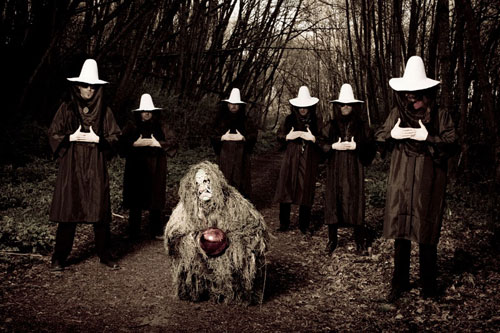 In 2005 they released “Visible Sign Of the Invisible Order” a recording of improvised ritualistic musical gatherings by the collective. Recorded mostly outside deep in the Cascade Mountains and in large ensemble sessions at Aleph Studios. The record was released on the Sun City Girls Abduction record label and featured honored guest appearances by Alan Bishop and Charlie Gocher of the SCGirls.
Totem One (Conspiracy Records 2009), Master Musicians Of Bukkake’s second record and part of a Northwest trilogy, Marks an evolution from their first record “Visible Sign Of the Invisible order” (Abduction records 2005).

“Far West” is the soundtrack to this expedition to the caves of light we all travel into with hopes of acquiring redemption, only to realize our bodies have dissolved—gone like rain from the sky, snow from the ground, thoughts from the mind. The sound of “Far West” is a progressive folk record inspired by Paul Giovanni’s Wicker Man soundtrack, early Canterbury prog folk, the suspenseful soundtracks of Goblin and Ennio Morricone, Gerry Goldsmith’s interwoven dark orchestrations, and Pacific Northwest folk rock. The Master Musicians of Bukkake take an earthly and shamanistic approach to these influences and infuse it with Krautrock pulses interweaved with acoustic guitars, intricately layered rhythms, hazed-out modular analog synths, brassy stabs, and cultish choirs. A true psychedelic, audiophile experience to dissolve your body in.