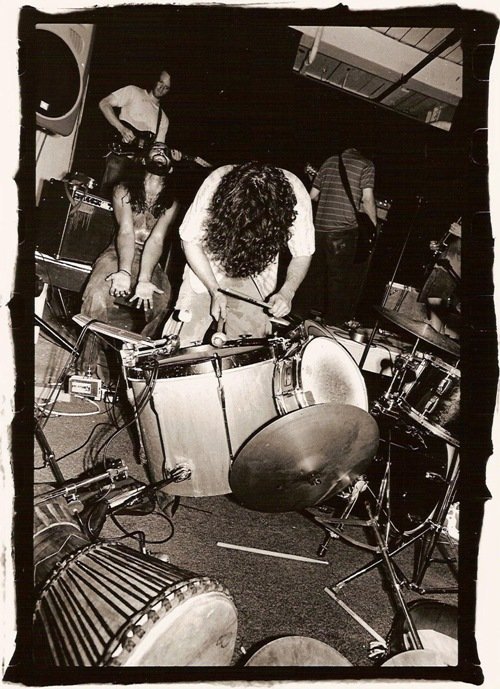 SUNBURNED HAND OF THE MAN Usa

MOJO Magazine.. I still remember the gig, East London, the tramping of plastic glass underfoot, the whispering of the truly scary mad bloke on my right, quietly cursing the band, and out of the speakers, a sound like asthma, bees packed in the chest and ghostly voices that bore no resemblance to the act on stage, this shifting crew of eight, maybe twelve, hairy and bald types named Critter, Chad, Cousin Rich, Phil, Reverend John, and other things, all in a circle, beat out chain-gang rhythms, led by the pulsing bass of aged schoolboy scholar Rob Thomas. Formed in Massachusetts in 1997 from such defunct outfits as Franklin's Mint, Fisherman's Faggot, Shit Yourself, Faxed Head and Ghetto Breakers, this band who debuted with an album called Shit-Spangled Banner, played abstract psychedelia with roots in Peter Green's Fleetwood Mac, Cream, Funkadelic and Ash Ra Tempel, but made out in the dark woods by the demon children of John Fahey, abandoned in a car full of tapes. I remember the stage, the aftermath of some '68 hippie riot - protesters trapped in the dying control centre - and the groove lurching on and on, the band circling constantly, like a ragged drum and bugle corps born of American's two Sawyer families - Mark Twain's ragged-trousered truant leading Texas Chainsaw Massacre's pallid cannibal family up from the rusty iron depths of their stuckboard kill-pit and into the sun: blasts, chimes, clanks, screams, thunks and mental-institution shouting-in-the-dark; a terrifying mystic broadcast on the King Biscuit Flour Hour. At the end of the gig I met two girls who told me it was the worst band they'd ever seen. And they were laughing, hard. But, you know, in a good way..... Andrew Male.. Mojo Magazine