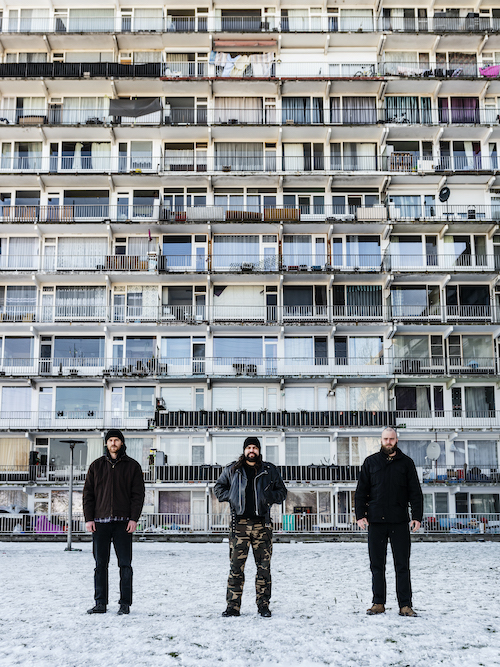 WIEGEDOOD Belgium
“I, II and III all focus on the subject of loss,” say WIEGEDOOD in a collective statement. “It’s inherently in our nature to desperately hold on to the people and the things we love. All three records are dedicated to Florent Pevée [from Kabul Golf Club], a close friend of Wim [Coppers] and a great musician who lost his life at 21. This is our way of honoring his life.”

As the final part of the De Doden Hebben Het Goed trilogy—which translates to English as The Dead Have It Good—WIEGEDOOD’s newest album, De Doden Hebben Het Goed III, is a natural extension of its predecessors. What the three albums share sonically—a violent yet epic brand of black metal—they also share thematically and physically. III blends the atmospherics of I and the aggression of II. The band says they’ve “found the perfect crossover.” WIEGEDOOD have also found a four-song formula that affords the trio latitude to explore without the wearisome effects of interminable concept album lengths. And finally, the albums also benefit from similar covers—photographed by Stefaan Temmerman—where nature and the WIEGEDOOD sigil play important parts of the whole.

“Our logo represents our band perfectly,” WIEGEDOOD asserts. “So, we felt that just our logo and the soil which it is planted in, would be great for theses albums. The picture for III was taken in Sint-Eloois-Winkel, a small town near Kortrijk where Levy [Seynaeve] grew up. Subsequently, the cover for II was taken in De Haan, where Gilles [Demolder] spent his childhood and the first cover picture was taken in Ransberg, where Wim grew up and is still living today.”

As a band that has common membership with Belgian post-black metallers Oathbreaker and post-metallers Amenra, finding time for WIEGEDOOD—pronounced We-guh-doad—isn’t a challenge, but rather a directive. Time must be made and spent on behalf of WIEGEDOOD not in spite of it. Musically, the group don’t see similarities in or with Oathbreaker or Amenra, however. With this distinction the Belgians are empowered to express themselves singularly. As a result, the writing sessions for III (and its predecessors) don’t ‘bleed over’ or ‘bleed through’ with the band members’ other projects.

“Because of our busy schedules playing and touring in other bands, all our songwriting sessions are extremely productive,” says the band. “We know how little time we have and we set even tighter recording deadlines to push ourselves even more. All songs are therefore written for III. There is a clear evolution between all albums.”

Recorded by Christophe Dexters at House Rott Child Studios in Belgium over the course of 10 days, III is clear and powerful yet nuanced and nimble. Unlike WIEGEDOOD’s peers, III pivots on a different thought axle, where loss and reflection, anger and desperation are imbued into everything. To capture the essence of III—tracks like ‘Prowl’ and ‘Doodskalm’ highlight WIEGEDOOD’s tumult—the Belgians re-hired Californian Jack Shirley (Deafheaven, Oathbreaker) to mix and master at his Atomic Garden Studios. The result is overwhelming yet distant, dangerous yet tactful.

“House Rott Child Studios is the perfect place for us to record,” WIEGEDOOD say. “Because there isn’t that awkward engineer/producer/musician relationship. Christophe knows exactly what kind of sound we are going for and we know how he operates. This is why we love going to House Rott Child Studios so much. We feel right at home because of our previous experience recording there. We had the time to experiment and try out new ideas. In the studio we basically use the same set-up as we do live.”

Previously, the trio were with Belgian indie ConSouling Sounds for albums I and II. Now, WIEGEDOOD have signed over to Century Media Records to release III. With III ready to dominate, a new label supporting, and a broader audience waiting, WIEGEDOOD are poised to take their black metal marque beyond the confines of Europe.

“We’re excited to see where 2018 and the co-operation with Century Medial will take us,” say WIEGEDOOD. “There are a lot of plans for 2018, a bunch of concerts are lining up and we’re going to play on new continents.”