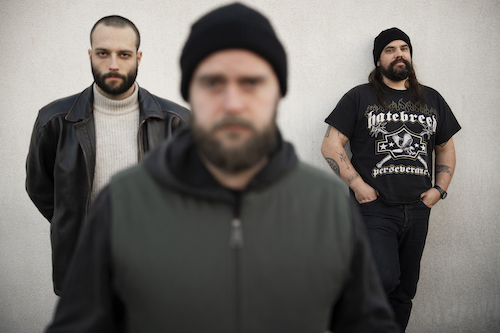 CROUCH Belgium
CROUCH was founded somewhere around 2021 when Levy Seynaeve and Wim Coppers decided the world needed a good, slow heavy band. After working together on 4 Wiegedood albums, it quickly became clear that the songwriting mojo also translated when composing Crouch songs.

When 4 songs were finished, the EP was recorded by Gilles Demolder (Wiegedood, Siem Reap, Oathbreaker). Up until then, there was no bass player and Levy recorded all the bass lines himself. This search was quite an easy task: Jasper Hollevoet, who earned his stripes in Siem Reap and Ventilator, provedto be a great match. Crouch was born and is ready to take over.

The Crouch EP will be self-released and self-titled, coming out later in 2023. Recorded and mixed by Gilles Demolder and mastered by Audiosiege.

In the meantime, Crouch is ready to play shows and working hard on a full length album.

Listen to ‘The Light Is Mine’ here taken from the upcoming Crouch EP.